I’m a millennial. This will hopefully lend some context to what I’m about to show you, because you tacitly understand that I’m basically required by law to get on Snapchat and to overuse emoji, stickers, and gifs (which, by the way, are literally everything). I fought the urge for as long as I could, but peer pressure won out.

I’m also a Product Designer, which carries its own meaning. In general, designers of all stripes are trained to look at the world and see opportunities to make it better. This trait has resulted in things like the iPhone, the three point seat belt, and the wheel. Today, it brings you a nicer way to use emoji.

People often ask me what my favorite apps are. There are many I use daily, but two shine above the rest as brilliant examples of what thoughtful, human design can accomplish. Those are Alfred and Slack.

Alfred is by far my most used app. The creators describe it as “an award-winning app for Mac OS X which boosts your efficiency with hotkeys, keywords, text expansion and more.” I describe it as magic at your goddamn fingertips. Take almost any part of your day, and there’s some way that Alfred can make it better.

Last week, Alfred 3 was released. I know this because the feeling was not dissimilar from a favorite band dropping their long-awaited new album. Had the latest version been released at a physical store, I’d have lined up at dawn in a bowler hat. All of this is to say—Alfred’s pretty great.

The next on the list is Slack, which probably doesn’t need an introduction at this point. I love Slack for many reasons. Flawless sync across devices, great search, friendly microcopy. Most of all, it’s how it enabled me to keep in touch with some of my favorite people in a fun and engaging way. The thing Slack does best is make communication extremely easy, while getting out of your way.

One example of this is—you guessed it—how they handle emoji. Slack has adopted a design pattern that autocompletes emoji whenever you start with a :. This pattern is useful mainly because it doesn’t force you to stop and switch context from what you’re currently focused on — typing — to add some character 😬.

Slack isn’t the originator of this pattern. More technical people (aka “power users”) have always preferred to stick to the keyboard as much as possible. Even laypeople enjoy the added efficiency and ease. And so autocomplete and character replacement has been around in one form or another since the early days of the internet. More recently: emoji.

Many have realized that this is a sensible and thoughtful way to integrate emoji with text editing (above is an example from GitHub, implemented in 2012).

OS X went another way, though, and opted for The Most Awkward Shortcut.

On Macs, the absolute fastest way to get, say, a scream emoji mid-sentence is to:

Now, I know what you’re thinking: There’s never been a better definition for a first world problem than someone getting on a soapbox to complain about a slightly less efficient way to add cartoon faces to his online messages. I can’t argue. The wheel definitely did more for humanity. But as a productivity nerd, inefficiencies bug me, and as a designer I deeply believe in improving experiences, no matter how small.

And in fact, to some people, this isn’t that small. Typing is something we take for granted; it’s the main way we communicate these days. Emoji are also becoming ubiquitous, so the extra seconds we take to use them can add up.

Besides, it’s not even that extra time that’s the problem; it’s the cognitive load that comes from context switching—from breaking mid-flow to focus on something else and then shifting your focus back again. Our generation, like it or not, has a limited attention span as it is. Focus is a precious resource, and the current emoji implementation is, if only a little, exhausting it.

This brings us back to Alfred. The latest version introduces Snippet Expansion à la TextExpander. This means you can type a keyword and have it automatically replaced with something else. For instance, ::email could be replaced with your full email address. It can save you a ton of time on repetitive tasks.

Over the years, Alfred has allowed me to streamline countless parts of my workflow (if you bug me on Twitter, I’ll write a post about it some day). Today I’m going to use this wonderful app to become a better, faster, stronger millennial—and you can too!

Let’s see what this bad boy can do.

Auto expansion. The point of this entire thing. Typing :joy: anywhere on your computer will now result in 😂

Fuzzy search. Open Alfred, type s (or whatever your snippet command is), followed by your query. Fuzzy search is incredibly useful when you’ve missed a character. The entire point of this is to keep you in the flow, so you don’t want to double back to the start of your query. 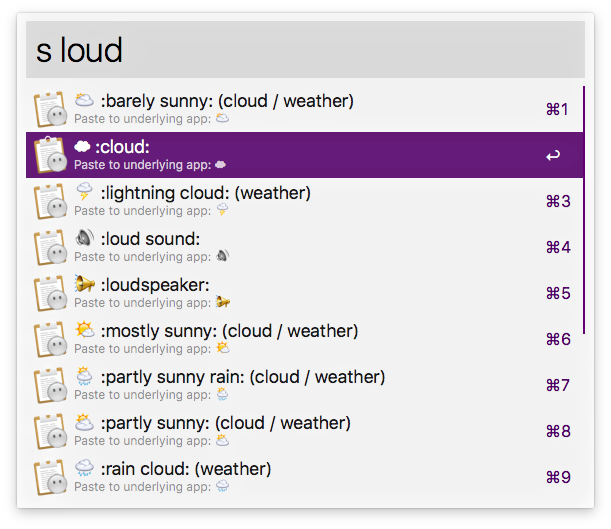 Once you select an emoji, it’ll be added to your text field, as well as copied to your clipboard, which means you can just cmd-V to add several more 🎉🎉🎉

Thoughtful naming and metadata. The naming scheme is, for the most part, based on existing standards, but some have been altered for a better experience. For instance, 👊 can be added with :fist bump: :face punch: or just :punch:

You can also search for specific categories such as weather (as seen above) or flags. I’ve gone ahead and added the country names so you can search by those too. 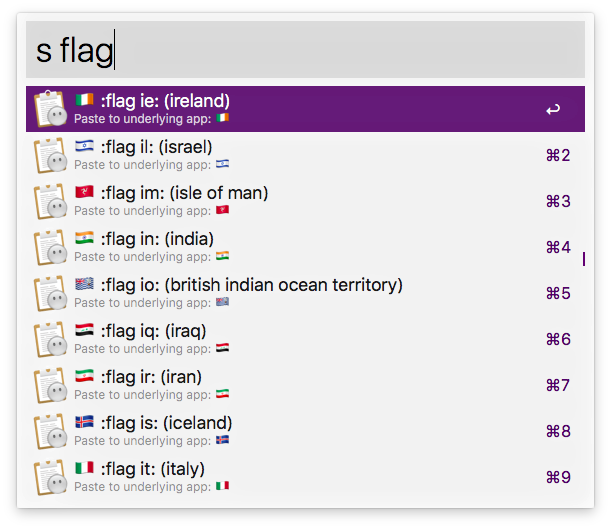 Emoji browsing. Just open Alfred from anywhere and type s  : to see a full list of emoji. Then scroll down forever and enjoy. Not the most useful feature, but whatever. 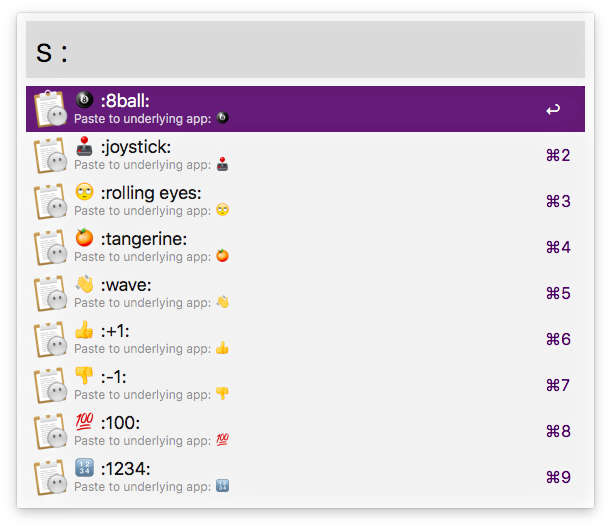 Step 2: Download the Alfred Emoji Pack and open it. 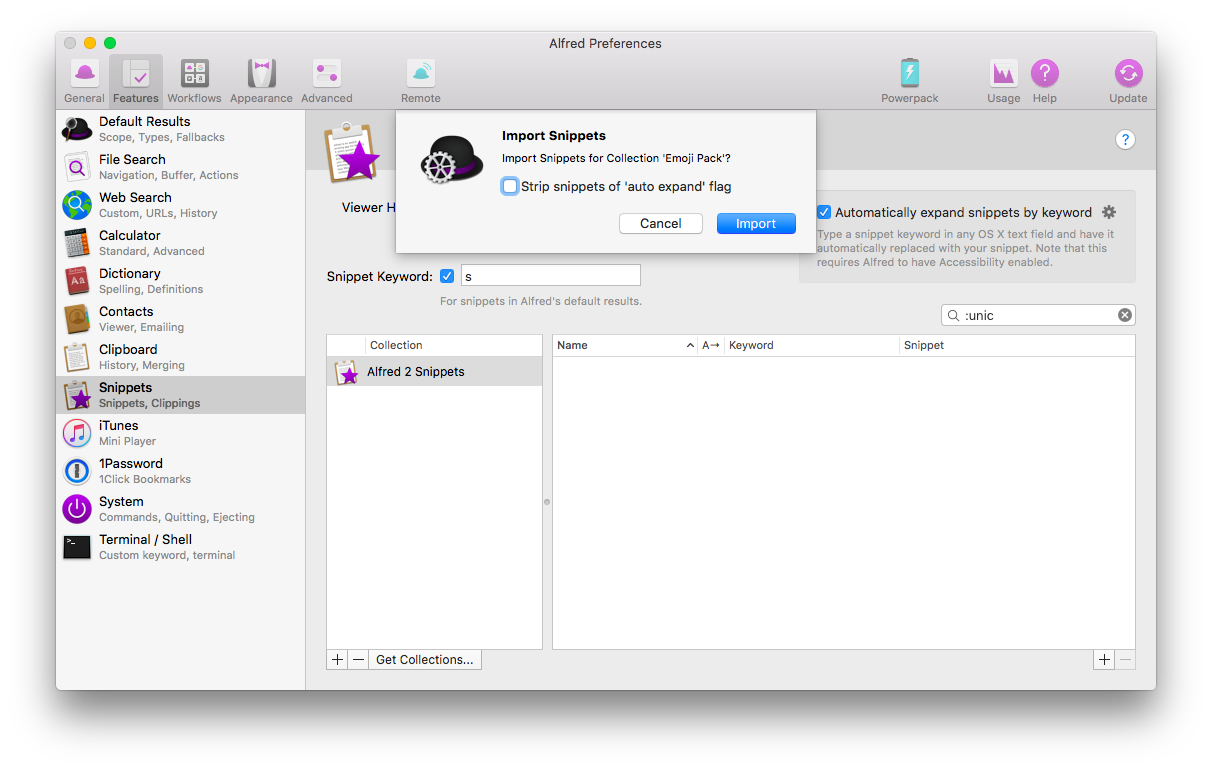 Step 5: Make sure to check “Automatically expand snippets by keyword.”

Step 6: Click the gear icon on the right. The options here are pretty self-explanatory. Customize them to your liking 😄 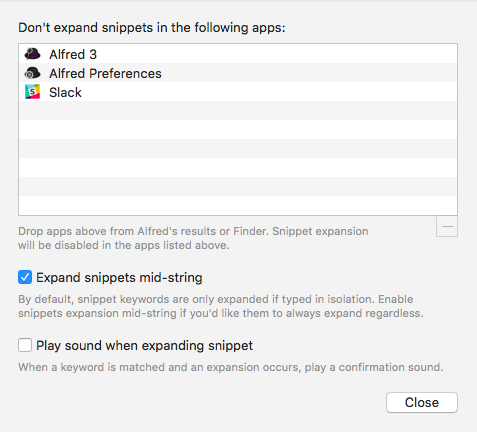 That’s it. You should be good to go 🙌

This implementation obviously isn’t as powerful as true autocompletion. I hope we get there soon (🙏 Apple gods). But in just the couple of days I’ve been using this, adding emoji has become so much easier and increasingly fun. An obvious side effect: way more emoji. I hope the same will be true for you!

I highly encourage diving deeper into what Alfred can do for you beyond snippets. Web searches and workflows are a godsend and will make your life magic.

Joel led Product Design at DigitalOcean. Now he makes GitHub. He doesn't write often, but when he does, he makes it count.

Sign up below for:
✅ Sneak peeks at upcoming design articles.
✅ Exclusive content and bonus material.
✅ Weekly Q&A with your questions about design, career development, etc.
✅ Access to the archives 🙃